This is our second European tour this year, the first taking place in July and August. I wrote a blog about this tour that you can read on the AofR site. As opposed to the Summer tour which was playing mostly mid sized and large reggae festivals, this tour is mainly us playing clubs.  I like this better personally. Why? Because it’s usually just us playing, sometimes with a small opening act, but because we are the featured band, we get time for a full sound check, and that is critical. At festivals we are playing in line with other bands and there’s no real time for a sound check so our sound engineers, Marlene and Michael, who do a KILLER JOB, are hustling to get our on stage sound as good as possible through the first couple of tunes. And yes, we are using in ear monitors mostly.

This tour, the clubs we are playing range in capacity from 500 to 3000.  In Europe the support for arts and music is MUCH more robust than in the USA.  All of these clubs we are playing are built with government funding. Not only do they have mostly amazing sounding performance halls but often include studio spaces and other arts programming for use by people in the community. AMAZING!  It’s basically the people of these countries saying ‘we value what you do as artists and musicians and are willing to support you with these facilities and programs, and we want our government to spend some of our money to support you so we can enjoy what you bring to society.’  In the USA it’s all privatized so the communities with money get the goods while everyone else misses out on such cultural enrichment.

Did you take a look at the map of the tour that is the lead image for this blog?  Take a close look.  It’s GRUELING!  28 shows in 34 days. We are doing multiple 5 and 6 consecutive nights in a row with very little down time and mostly living in the bus. I won’t say much more about this but to say that this kind of schedule requires patience, a sense of humor, support and understanding from your bandmates, rest and exercise when you can….also some kind of grounding practice – mediation perhaps?  I took up the study of tai chi some years ago and take myself through the Wu style short form now and then.

The biggest and toughest news is the sudden and totally unexpected passing of our trumpet player, Rich Armstrong. He died of a heart attack two nights before we left on the tour! I only knew him through the recording of the Groundation album (One Rock) over a year ago and through the previous European and California/Hawaii (September) tours. We became friends. He was/is an incredible trumpet player, and singer.  Very creative. Very energetic – he was always doing whatever there was to do in whatever location we were at – surfing, riding bikes insane miles, go karting, etc. He was a lead player, meaning he could SCREAM those high notes but also he could improvise beautifully melodic solos.

Every night on this tour we have been playing the song “Live it Up” and LIVICATING it to him. Harrison does an eloquent talk on mic, explaining to the crowd how we are actually a 10 piece band and points to the stage where Rich would have been. Then he gets the crowd to throw their hands up in the air and say ‘Hi Rich!” Indeed our horn section sound thin without him and Jeff Cressman (trombone) and Roger Cox (sax) are continually trying to re arrange their parts to find the best sounding combinations with only two horns.

No doubt we are all in some kind of shock over his loss. I don’t think we have fully absorbed it, felt it, grieved it, understood it.  That may come more fully after we finish the tour. In the mean time we’re playing this music as deeply as possible, for Rich. 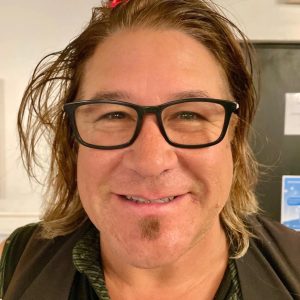 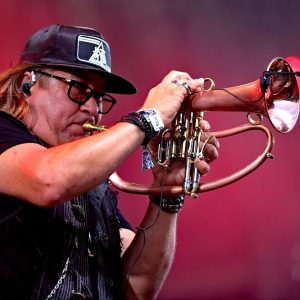 11/20/22
Tour finished! …about 2 weeks ago. I’ve been home, not living on a bus and a hotel, constantly on the move and it feels great to do laundry and to take my socks out of my bureau…instead out of a back pack and suitcase!

As I look back on the experience, the over arching observation that comes to mind is that of contrasts. This tour because it was so grueling, really put into clear focus how, on one hand, it’s challenging to be on the move  and performing so much requiring you to do all you can to stay healthy, well rested, to eat enough, to get exercise, etc., while on the other hand the music and the crowds who came to hear us were completely off the hook! I can say that there were a few times I was really in a bad mood and the incredibly enthusiastic energy from the audience completely turned me around.

THANK YOU to any and all audience members who came out to hear us!  After shows, when hanging around the merch table, meeting fans and sometimes signing LP’s, CD’s, T shirts (and even a cell phone!), I always speak about how it’s all about the relationship: that we, the band, can’t do it without the audience!  I think that’s one of the most inspiring things for me about performing – it’s making the connection with the audience members! No doubt everywhere we went the audiences were totally engaged and riding the musical wave with us, but I have to say that the crowds that showed up in Madrid and Barcelona THREW DOWN!  At one point towards the end of the show in Barcelona, I believe it was, a woman jumped on stage and was trying to kiss all of us. Security had to escort her off the stage.

Occasionally I will ask a fan to tell me a bit more about WHY they like the music so much and they always start by placing one hand on their heart and then start speaking about how the music changed their lives. I feel quite honored to be part of an experience, a musical one, that brings such meaning to so many people.

Here’s two videos: A performance of one of the band’s most popular tunes, ‘Picture on the Wall.’  This is one of my favorites because of the slow, sultry tempo AND because I get to play Marcus Urani’s awesome piano solo. It uses block chords or ‘drop-2’ chords for a big fat and smooth sound. I only wish the solo was longer. The second video is an attempt to show the events of a typical day. 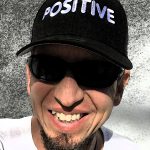 Founder of Art of Reggae.

Select the fields to be shown. Others will be hidden. Drag and drop to rearrange the order.
Click outside to hide the comparison bar
Compare
Compare ×
Let's Compare! Continue shopping